Your phone starts to ring, and you wonder who could be calling at this odd time of day. You pick up your phone, only to see that your concussion is calling. Debating whether to just send it to voicemail (it’s a pesky caller!), you ultimately decide you will hear out what it has to say. So, what does your concussion have to say to you?!

Your concussion begins the conversation by telling you that your brain is struggling, in more ways than one. It’s pretty common knowledge that concussions need a good amount of time to fully heal, but you might not know what exactly is going wrong.

When that blow to your head first strikes, the membranes within the brain’s axons get leaky, letting substances in and out that would normally be more tightly regulated. Because of this, sodium and calcium ions rush into the cell, leading to depolarization of the membrane. When the cell depolarizes, it is much more likely to fire an action potential. When the ion movement is going awry, the sodium-potassium ATPase works in overdrive to try to restore the normal concentrations. Here’s the kicker, though: the ATPase requires an immense amount of energy, so kicking it into overdrive means that we have an energy crisis—too much ADP and too little ATP.

The leaky membrane also means that the cell will face altered neurotransmission, specifically releasing WAY too much glutamate as a result of depolarization and wanting to fire. Another important issue is that the axons are suffering from injury as well, meaning that they are not functioning properly. While they may not die altogether, the injury can be so severe that the damage is beyond repair and the axon may never function properly again. The last point your concussion tells you is that the cells may start to die off. These aforementioned problems may lead to activation of proteases, which are enzymes that will destroy other proteins and ultimately lead to apoptosis: cell death.

After hearing all of that, you start to feel bad for your concussion! You thought it was just a nuisance, but you’re now realizing that it’s no wonder it is taking a long time to recover, there’s so many issues happening!

Take care of me!

After your concussion has told you some of the scary things happening at the molecular level in your brain, it moves on to tell you how to best recover, saying don’t spend time on your phone!

It may be common knowledge, but phone use is heavily discouraged when recovering from a concussion, as it can significantly prolong recovery time. In a study of 335 concussion patients, it was concluded that those with higher mental stimulation (from electronics, for example) needed on average double the time required to make a full recovery. Not something to mess around with! Think about it: with all of the issues mentioned previously, you do not want to be overstimulating your brain! The main takeaway here is that recovery time is largely dependent on a patient’s ability to avoid excessive mental stimulation.

But… do you need to halt phone use altogether?!

Use your phone wisely!

While it is known that phone use can prolong recovery times, there may be constructive ways to incorporate phone use into recovery. A mobile phone app called SuperBetter, used in conjunction with standard medical care, was demonstrated to improve outcomes and optimism for concussed teenagers. 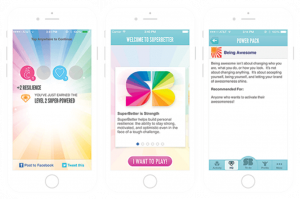 The app essentially functions as a gamified symptoms journal, where concussed individual reports symptoms and feelings, then the app turns those inputs into a game-like version of their feelings. This can help avoid social isolation associated with concussion recovery, especially since concussion patients are urged not to do anything that may be detrimental to their recovery. Within the app, users could form a network around their symptom log and comment and interact with other users’ posts, generating a cohesiveness between patients that may be looking for some more interaction when able. The main takeaway here is that, while you shouldn’t be overstimulating your brain and harming recovery, you can use what little screen time you have in a positive manner, leading to a more efficient recovery.

With that, your concussion decides it has said enough. You hang up the phone, in awe at how much you didn’t know about what’s going on in your brain, and how you can best help it recover. Maybe now you’ll give your concussion more credit.